The game is played on an official napkin from Finnair Economy class, or on a board that looks like the attached picture, made from a grid of 6x6 points.

The two feet can be two small coffee milk packets, two sugar cubes or two ear rings. The ski can be a coffee stirring stick or a short pencil.

The instructions are written on the attached screenshot, with graphics illustrating the possible moves. The transcript from the rules paper:

2. Feet movement (only one of the 4 adjacent positions, no diagonals)

One movement each foot each turn, independently. Feet do not have to stay together.

- Pivot from any ending

- Cannot land on a foot

- When on 4 distance, foot can be on adjacent positions

- 45 degree diagonal is too far! No big diagonal.

When adjacent to ski, foot can slide to any adjacent position next to ski. Must finish turn off the ski!

Count points = distance from foot starting point to foot when the game ended. Final score (for the foot player) is sum of both feet. 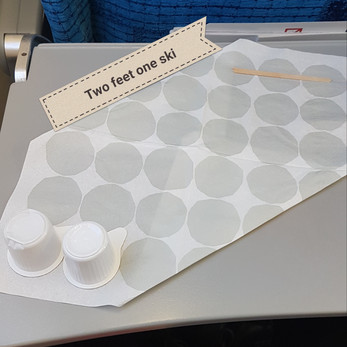 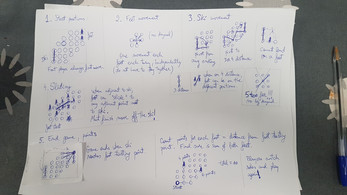